Who exactly is it who doesn’t have anything to lose? Even if the Gulf States have far more and far better planes and even far better pilots, one single hit by an European bomber or missile can do a lot of damage. Also, starving the West of oil could mean a rise of the BRICS-countries, from the frying pan into the fire. Note that bombing raids in retaliation against European cities would mainly hurt Muslim immigrants and their liberal elite protectors, that is, the much-hated doctrine of collateral damage.

Cf. catapults during the siege of Ta’if. 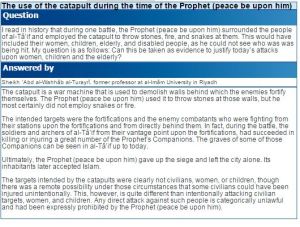 The targets intended by the catapults were clearly not civilians, women, or children, though there was a remote possibility under those circumstances that some civilians could have been injured unintentionally. This, however, is quite different than intentionally attacking civilian targets, women, and children. Any direct attack against such people is categorically unlawful and had been expressly prohibited by the Prophet (peace be upon him).

Many internet tough guys call for the nuking of Mekka, while ignoring lesser targets like Tetouan, El Hoceima, and Smir, overlooking that conventional weapons are useful enough, and don’t leave radiation damage and such. They lose all sense of proportionality, while the wimpy maggots freak out at a simple knife and couldn’t even get a handgun if their eternal salvation depended upon it. The internet tough guys are more likely to be nuked, or struck by drone-launched missiles themselves.

That said, I don’t believe in a bilateral Clash of Civilizations. The next conflict will be multipolar.

The new system is equipped with a high-power relativistic generator and reflector antenna, management and control system, and a transmission system, which is fixed on the chassis of BUK surface-to-air missile systems.

When mounted on a special platform, the ‘microwave gun’ is capable of ensuring perimeter defense at 360 degrees,” said a spokesman for the Kremlin-owned United Instrument Manufacturing Corp, according to Sputnik News.

As well as its reported capabilities for taking out drones and warheads, the ‘microwave gun’ is said to disrupt radio frequencies and “deactivate the equipment” of low-flying planes, the report said.

The system has a range of 10 kilometres (6.2 miles) and can be fired in any direction.

“In terms of performance capabilities, the complex has no competitors in the world,” the source said in a Russia Today report. All the equipment is mounted on a tracked Buk missile air defense transportation platform.

The newest Russian military aircraft, the Yak-130 was also on show at the Army-2015 expo, an international military forum that took place at the ‘Patriot’ military amusement park.

The Kremlin will also add hundreds of drones to its military by 2025 and unveil the new Armata T-14 tank. It is said to have ceramic armour which is 50% stronger than traditional equipment, a powerful 125-millimetre cannon and an electronic warning system to head off potential mechanical problems.