Most MRA’s are enamoured with the intactivist movement regarding circumcision. They make silly comparisons between FGM and circ, making people laugh at how ridiculous they are.

Whether you think circ is a good thing or a bad thing, MRA’s use it because it’s something to use as a weapon to attack women. This is precisely what happened when a bunch of them attacked Dr. Monaghan outside a convention. They held up their signs with their crotches spray painted red and told her about what they like to see happen to women’s genitals, especially when they’re at home every day beating off to it.

What they think of the doctor, after they spent days harassing her and beating off to torture of women (comments from AVFM): 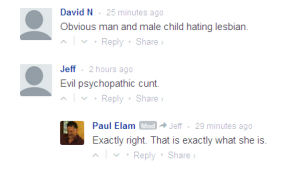 Then they got sad face when the good doctor told them that hey, maybe they should cut the whole thing off so they’ll stop harassing her. OMGERDDDD! The doctor talked back! She put my male violence in my face to show me how fucking ridiculous I’m being! Then they told her to ‘cut off your pussy lips BITCH!’ ‘Cut your VULVA BITCH!’ ‘YOU’RE A PEDOPHILE!’

These MRA’s harassed these doctors for days, specifically women, and then when the good doctor got angry they took that one comment and began failling on their fainting couches. They forgot to edit out the sexual violence they wanted to do to her afterward and in a brief moment of intellect, understood what FGM is all about. FGM is about cutting girls completely whereby they have ZERO sexual pleasure and have complications their ENTIRE lives. It makes it easier for men to own women as baby making machines and fuck holes. This never happens to men, ever.

She’s not the first female they’ve harassed. This MRA made another video where he claims he met two women, who he assumed were doctors, and claimed they said they’d stop circumcision when they got equal pay. Of course he didn’t catch any of this on camera. I imagine he targeted a couple women and then started harassing them because that’s what this is really about. These MRA intactivists specifically target women so they can use circ to harass them. It’s as simple as that.

See, it’s ok for dudes to beat off to women and girl children being gagged, anally raped, vaginally torn and bruised on a daily basis but goddammit if a doctor makes a quip about MAH DICK when I’ve been harassing her for days!

Your dicks work just fine when you beat off to women and children being genitally, anally, and orally tortured on a daily basis. So I don’t want to hear your shit about how you can’t sexually function and manhating lesbian doctors are ruining your life.

You compare FGM to circ and people laugh at you and they’re right to do so. How is it that you don’t understand the differences between how and why girls are cut up to nothing and how and why you are NOT? Nevermind, don’t answer that. You should already know.

I am Jewish and it’s part of our covenant for boys to be circed and after my experiences with men who are uncirced having problems I would be more likely to circ my child.

I actually think the medical evidence is pretty compelling FOR it. I also don’t think harassing women at medical conventions accusing them of being man hating lesbians is going to stop the practice.

Either way, it’s about educating parents about it, not screaming at women.