During his trial this past week, Islamic terrorist Abu Hamza al-Masri said he believes the World Trade Center towers were brought down with controlled demolitions. Of course, this puts another Islamic terrorist on board with talk radio show host Alex Jones, who says the same thing. Jones has been gaining in popularity over the last decade because he’s effective at mixing a concoction that is made up of some truths, a lot of sensationalism, and sometimes lies.

If someone wants to argue – as Shoebat.com has – that the Bush administration got into bed with Muslim Brotherhood groups and leaders both prior to and after 9/11 thanks to Grover Norquist’s advances and Karl Rove’s acceptance of those advances, it’s an irrefutable argument. In fact, if you want to go a step further and argue that the Bush administration covered up its relationships with these groups and furthered them after 9/11, that would also be accurate.

However, to argue that the towers were brought down by Bush, Cheney, or an assortment of their underlings is absurd.

Jones is irresponsible and sensationalizes his programs for effect, often at the expense of the truth, which is dangerous when it’s deceptive and not satire. A perfect example of this is New Year’s Eve in 1999. Jones was completely irresponsible and like H.G. Wells, used the radio to convey something untruthful to his listeners. Unlike the infamous ‘War of the Worlds’ broadcast, Jones was trying to mislead his listeners.

If you are ever inclined to defend Alex Jones, you should listen to this before doing so:

I once attended a house church whose patron saints seemed to be Alex Jones, Peter S. Ruckman and Jack Chick. When I pointed out that Mohammedans concocted and perpetrated the act, they quickly reverted to Building 7. Since we witnessed it in real time, it takes more effort to believe the conspiracies about 9/11 than actually believing the truth. Face it. The terrorists were more competent than the US government – who had foreknowledge of the people involved. Their incompetence in preventing this act is better documented than all the Alex Jones conspiracies about 9/11.

This will create more paradoxes and contradictions…

Common sense tells us that both reduction of STDs and loss of sensation are likely if thin, moist, but highly enervated skin is removed. So both sides tweak science if they deny either.

A religious-studies instructor at Missouri State University who invited a former Ku Klux Klan leader to speak to his class two years ago is drawing scrutiny after that same man became the sole suspect in shootings that killed three people at Jewish centers in the Kansas City area on Sunday.

The instructor, David Embree, defended his decision in a statement released on Monday, saying that he wanted to educate his students on white supremacist worldviews.

The man who spoke to students in Mr. Embree’s course, Frazier Glenn Cross Jr., of Aurora, Mo., is a former “grand dragon” of a branch of the Ku Klux Klan and has a history of expressing anti-Semitic and racist views, according to the Southern Poverty Law Center, which tracks hate groups. Mr. Cross, who is also known as Frazier Glenn Miller, is accused of killing three people at a Jewish community center and a retirement center in Overland Park, Kan., on Sunday, the day before the start of the Jewish holiday of Passover.

The revelation that Mr. Cross had been asked to speak to Missouri State students was first reported by BuzzFeed.

Mr. Embree said speakers like Mr. Cross help students grasp the danger of hateful worldviews. But others said that such classroom appearances can legitimize fringe views and endanger students.

Mr. Cross described his visit in a January 10, 2012, posting on Vanguard News Network, an online forum whose slogan reads “No Jews. Just Right.” He refers to the students using multiple slurs, and writes that the visit made him feel “absolutely TERRIFIC and CONFIDENT, even braggadocious.”

Mr. Embree said the classroom visit spurred his students to warn others about the dangers of white-supremacist philosophies.

“I know that the ‘nice’ students I tend to get would not believe what their textbook or I told them about the hatred and venom of these groups unless they encountered one of them,” he said in his statement. He added that he had warned students in advance about what they might hear.

‘A Platform to Glorify the Hatred’

Karen Aroesty, the St. Louis regional director for the Anti-Defamation League, said there are better ways to teach about white supremacy, like using multimedia tools or inviting experts who have studied the subject firsthand, that do not “provide a platform to glorify the hatred.”

“It legitimizes him,” Ms. Aroesty said of inviting such a speaker to talk at a state university. “Feeding that ego can be very dangerous.”

The news that Mr. Cross had shared his anti-Semitic views with students “left me queasy,” she added.

Since Mr. Cross’s visit, Mr. Embree said, he has rejected requests from other white-supremacist groups to speak to his students.

“After feeling the full emotional impact of [Mr. Cross’s] presence, offers by others who called him a ‘poser’ had/have no appeal to me,” Mr. Embree wrote in an email on Monday. “He was enough. Even without the events of yesterday, I would never have invited him back.”

Mr. Embree said he still grapples with the question of whose views are too violent or extreme for a classroom.

“In New Religions classes, should we only invite in the benign ‘New Agers’ to present their worldview,” he asked, “or should we include Satanists or the hard-core Nation of Islam as well?”

Missouri State officials did not respond to a request for comment.

These signs were obviously not produced by the people holding them.

Andre and Sven take a look at the media’s attempts to hide the fact that Blacks hunt and enslave other Blacks, with reference to the current Boko Haram situation where slaves have been renamed ‘wives.’

Comment: It is obvious from this and earlier reblogs of mine that WN and Counter-Jihad aren’t fully compatible. Again. 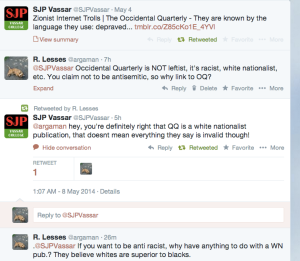 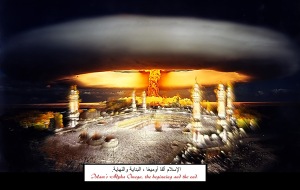 Nuking Mecca is expressly forbidden, according to my religious views. Even fancying the thought will lead to eternal damnation.

Voluntary euthanasia of people is morally acceptable, so people who consider any euthanasia intrinsically wrong will be damned as well. Ironically, involuntary euthanasia would pose less of a problem for most religions, who fear that allowing suicide would lead to everybody killing themselves in order to get in Heaven.

Do not run around and yell and scream that the WHOLE target society sucks. Not even on teh interwebs. That is spreading HATE and hate has consequences, as we all know well.

That is how Antifa does it:

1) A group of people learns languages in public education (learning their own languages at home or at specialized schools)
2) Analyses outsider society
3) Discretely neutralizes the worst outsiders (i.e. “fascists”)

Anything else will result in Epic Fail.

Hell is eternal. Only my religion allows euthanasia. Abortion and pornography can only be allowed if euthanasia is allowed as well.